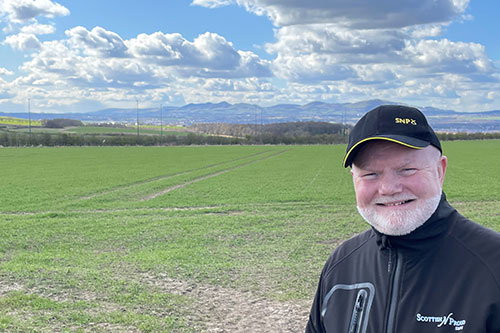 Midlothian View Holyrood Challenge: This View has been written by Colin Beattie, the Scottish National Party’s candidate in the Midlothian North & Musselburgh constituency for the Scottish Elections on Thursday May 6th 2021

It will be no surprise to anyone that the central policy plank of the SNP is independence. Only by becoming a normal country with normal powers can we achieve the potential we are capable of. Many people ask me whether an independent Scotland would be financially viable. The simple answer is YES.

Actually there are two responses. The first is that if the Unionists are saying that after 300 years of Union Scotland is a financial basket case unable to run its own affairs without massive cash bailouts from London – then what a condemnation! A catastrophic failure of the “benefits of the Union”! The sooner we exit such a disastrous relationship the better for all of us because clearly we could do no worse running our own country.

Alternatively there is this belief that Scotland runs a massive deficit in its finances and so could not exist without London’s generous help. So let’s look at what this deficit actually is. Yes, it’s a massive selective accounting trick. Why does a wealthy country with a strong economy, booming exports, a highly educated population, and a wealth of natural resources have such weak finances according to GERS? Simple – GERS (Government Expenditure and Revenue Scotland) is not a set of accounts for spending only WITHIN SCOTLAND. It includes money spent OUTSIDE SCOTLAND which does not benefit the Scottish economy or its people.

Scotland paid £4.5 billion in 2019/20 in Public Sector Debt Interest (PSDI) payments alone towards the UK National Debt to fund mostly non-Scottish expenses. Under the UK, Scotland pays a population-based share of the debt. Yet the overwhelming majority of the National Debt is incurred OUTSIDE Scotland and benefits other country’s economies only.

In fact over the past 40 years Scotland has paid £133.4 billion in PSDI alone. Never mind the capital repayments which fall due. An analysis of these figures shows that excluding money spent elsewhere Scotland’s debt would have been near to ZERO. Yes, that’s correct. Until the need to borrow money for the Covid 19 bailout Scotland’s finances were in a remarkably healthy condition and an independent Scotland would have had no difficulty in finding the resources to handle this crisis.

It’s Westminster’s selective accounting. By loading the GERS figures with expenses incurred OUTWITH SCOTLAND, which have no benefit or relevance in terms of our finances, the Unionists try to make the case that we are too poor and pathetic to exist without the “broad shoulders” of the rest of UK to give us hand-outs. Rather the contrary. Scotland has subsidised the rest of the UK for far too long.

Support Midlothian View from as little as £1. It only takes a minute. Thank you