In an effort to maintain social distancing standards due to the COVID-19 pandemic, SCC held two days of drive-thru style ceremonies outside on the Albemarle campus. Two-hundred graduates walked across the stage and received their credentials as faculty, staff, family and friends cheered them on.

“On behalf of our Board of Trustees, faculty, and staff, I would like to congratulate our graduating class of 2021,” Enamait said. “You made it, in what has to be one of the most trying years of any academic season. You persevered and you have reached your goals, congratulations.”

Furr added, “Graduates, we wish to commend you on reaching your goals and achieving everything you set out to achieve here at Stanly Community College. This past year has been a difficult one with the pandemic but you stayed the course and here you are. Congratulations! We wish you much success.”

Three graduates received the Edward J. Snyder, Jr., Exceptional Scholars Award: Jeremy Collins, Zoie Frazier and Tyler Tucker. This award was named in honor of the second chair of the College’s Board of Trustees. Snyder was a member of the State Board of Community Colleges and the first chairperson of the College Foundation, a position he held for more than three decades. His support of the College provided scholarships and other resources for SCC for nearly four decades. An award was established in 2002 in honor of his services. To qualify, a student must be nominated by a faculty or staff member, have at least a 3.0 grade point average, submit an essay and complete an interview with a selection committee.

Not pictured is Zoie Frazier, Associate in Science graduate. 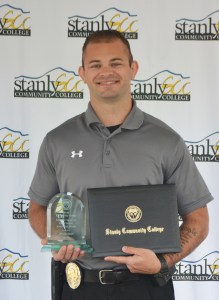 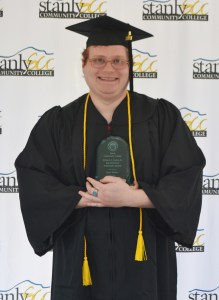 The following are graduates who received special awards: 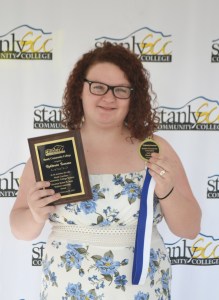 Vyktoria Iverson, Accounting and Finance student, received the SCC nomination for the NCCCS Robert W. Scott Student Leadership Award. In 2004, the NCCCS Presidents created the Governor Robert Scott Leadership Award as a way to (1) recognize student leadership on a statewide level while also (2) honoring former Gov. Bob Scott. He served as the state’s chief executive from 1968-1972 and then was president of our system for 12 years from 1983-1995. 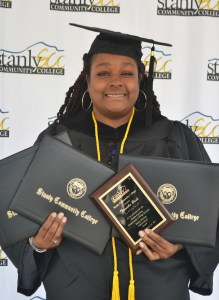 Tamisha Bush, Early Childhood Education graduate, received the SCC nomination for the NCCCS Dallas Herring Achievement Award. The award is presented to honor Dr. Dallas Herring, who served as chair of the North Carolina Board of Education in 1963 and is considered the “founder” of the state’s community college system. His philosophy for the system centered on making post-secondary education available to all citizens at a reasonable cost and the member colleges taking students from whatever educational level they entered to a level that offered them a successful career. 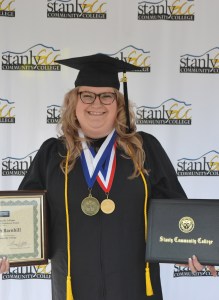 Hannah Barnhill, Accounting and Finance graduate, received the SCC nomination for the NCCCS (North Carolina Community College System) Academic Excellence Award. One student from each of the 58 North Carolina Community Colleges receive this award for academic excellence. In order to be eligible for this award, students must be currently enrolled, must have completed at least 12 semester hours in an associate degree program and must have a cumulative grade point average of no less than 3.25. 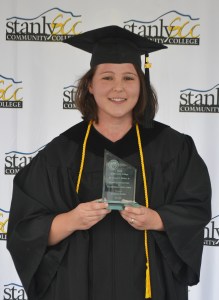 Lauren Locke, Radiography Technology graduate, received the Dr. George E. Eddins Jr. Award of Distinction in Allied Health Education. This award is named in honor of an Albemarle physician whose support of the SCC Foundation has allowed hundreds of students to attend college. This recognition was established in 2003 and is awarded to an Allied Health student who must have at least a 3.5 GPA, demonstrated leadership ability and a record of service to the community. 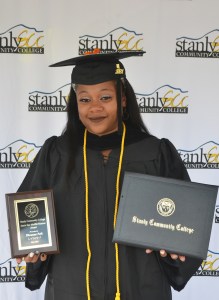 Tilwanna Polk, Cosmetology Technology graduate, received the Jerrie Sue Moffitt-Morton Award. The recipient for this award demonstrates the ability to overcome adversity, maintain integrity, and keep clients’ needs as their priority. The recipient will be known for putting others before herself while also possessing a fighting spirit when faced with life’s negative circumstances. 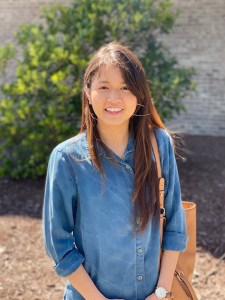 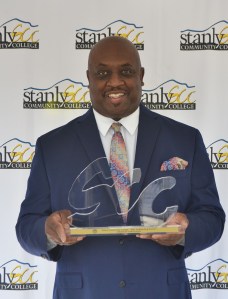 Dexter Townsend, Class of 1990, received the Outstanding Alumni Award. Each year one or more Stanly Community College alumni are recognized for their contributions to the College, the community and their profession. Eligibility for this award requires that the student must have participated at the College as either a curriculum, continuing education or basic skills/literacy student. The SCC Executive Leadership Team then selects the award recipient out of the eligible nominations. 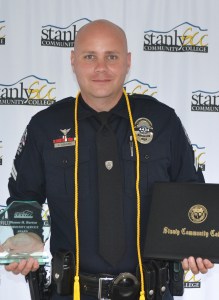 Jason Collins, Criminal Justice Technology graduate, received the Dianne H. Burton Community Service Award that was created in 2006 to honor the service of the past College Registrar. This award is presented to the graduating student that has contributed to the community through service learning. 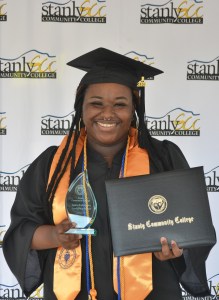 Dominique Gould, Associate in Science graduate, received the Annie Ruth Kelly Leadership Award. The Annie Ruth Kelley Leadership Award was created in 2001 to honor the service and leadership of the first chairperson of the College Board of Trustees and the first woman to chair a community college board in this state. Kelley served for 28 years as a college trustee. In keeping with the tenets of Kelley’s record of service, this award is presented to the graduating student who has excelled in providing leadership to fellow students, the college, and the community.