From April to June, scores of Whitley Penn LLP staff had no work—no tax returns to prepare, no mergers or deals to assist with. Even audit clients pushed back or canceled work on their annual financial statements.

“It was ugly,” said Larry Autrey, the managing partner of the top-50 firm, based in Texas.

Autrey could have cut as many as 70 people as the work slowed to a crawl. Instead, the firm told staff to catch up on their continuing-education requirements. They retooled consultants to help clients apply for emergency relief loans and staff called every client to encourage them not to put off necessary tax and audit work.

Whitley Penn was also one of nearly 38,000 certified public accounting firms that applied for a Paycheck Protection Program loan from the Small Business Administration. The vast majority of the loans were for less than $50,000, according to a Bloomberg Tax analysis of loan data.

The magnitude of loans going to CPA firms describes an industry fighting for survival. The dual health and economic crisis put firms at risk of going out of business, despite the need for CPAs’ expertise and counsel in helping firms apply for the same pandemic relief loans this spring. 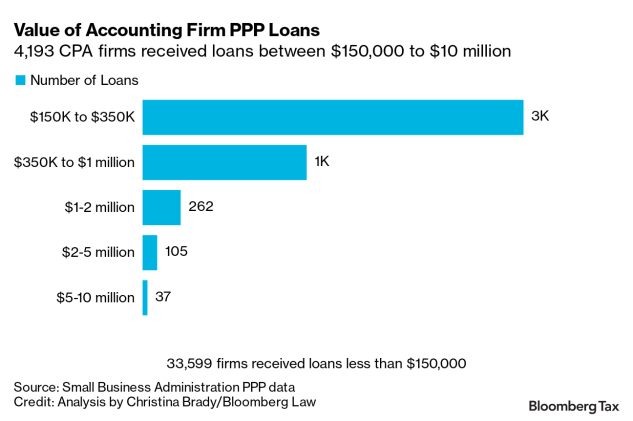 Save the Firm, Save the Client

Congress created the forgivable loan program as part of the CARES Act to provide economic relief to small U.S. businesses—generally those with 500 or fewer employees. The program closed in August with $529 billion in loans issued with questions remaining about how the government will process forgiveness applications.

In a typical spring, public accounting firms cut their workforces from 3% to 4%. But this year, among the largest 20 firms—those not eligible for the funding—many cut as much as 12% of their professionals, said Allan Koltin, who coaches accounting and law firms on how to run their businesses.

For eligible small and mid-sized firms, the relief loans were a lifesaver in the middle of an economic crisis that hit them harder than their larger competitors.

“Thank God that they were able to take advantage of the PPP loan because it would have been a blood bath in terms of layoffs,” Koltin said.

Even with the financial relief, the industry shed almost 78,000 accounting and bookkeeping jobs in April—the steepest one-month loss in over a decade, according to federal labor statistics.

The total number of jobs saved by the PPP loans isn’t clear from the SBA data, which appeared to report the size of firms’ total headcount or a substantial portion of its workforce. At least 1,000 firms listed had no information about the number of jobs saved.

Koltin said firms were hesitant to apply initially. Some called him, questioning whether they qualified as a small business. His response: “Damn right you do.” 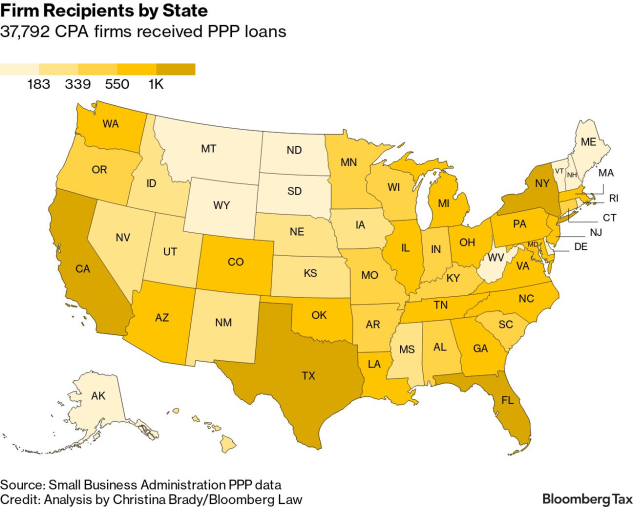 Carl Peterson, vice president of small firms at the American Institute of CPAs, said he wasn’t surprised by the total tally of firms who received relief loans.

For comparison, the U.S. Census Bureau counted just over 56,000 CPA firms in the country in 2018. The American Institute of CPAs, the industry’s largest professional trade group, has more than 44,000 member firms, the majority of which are sole practitioners.

“It goes way beyond just the firm itself,” Peterson said of the relief. “There’s a multiplier of the number of positions that were saved from the firms then getting the PPP loans, saving their staff and helping their clients save their staff.”

Most CPA firms are small—bringing in less than $5 million per year in revenue, and have few or no employees. They lack the capital, resources, and diversity in service offerings that allowed larger firms cope with the downturn.

And for the smallest firms, the economic strain hasn’t gone away. Their clients—local restaurants and bars and specialty retail shops—may have reopened, but business hasn’t rebounded entirely. And their clients’ struggles pose a threat to the firms’ ability to collect revenue now and in the future.

“There is still the uncertainty and question of whether or not a number of small firms are going to survive,” Peterson said. “They are still worried about what’s going to happen.

Larger accounting firms however, that were still small enough to qualify for the program, weren’t immune to the pandemic’s toll. Almost a third of the top 100 firms were among those who received loans between $5 million and $10 million, including Whitley Penn. Most were approved in early April, according to the SBA data.

None of the Big Four accounting firms, who count revenue in the billions and have tens of thousands of professionals on staff, nor any of the other top 20 firms received the funding, the analysis of the SBA loan data found.

The data, however, is not free of errors. For example, two sports and fitness businesses were among those identified with an industry code for public accounting firms that received loans for more than $5 million.

Squar Milner LLP, a top 50 firm that announced a merger with Baker Tilly in August, was among those large-loan recipients. Alan Whitman, CEO of Baker Tilly, said the firms are grateful for the funding that retained staff.

The loan also provided an infusion of cash for Squar Milner, and others, at a critical time, just as tax season was set to begin. But the scarcity of cash and the threat of clients who could still fail means that firms are still making tough choices this fall. In the case of Whitley Penn, partner compensation has been slashed to keep the firm afloat in hopes that business will pick up next year.

Autrey, the managing partner at Whitley Penn, has no regrets. While his peers held off on rent payments and licensing fees and made deep staff cuts, he retained employees, and will be able to welcome in a new intern class and put a batch of recent college graduates to work.

“The reason that we all did it is because we were afraid, afraid for whether our businesses would even make it,” Autrey said.