Commentators have made numerous statements: COVID, lockdowns, recession, drugs, arms sales. But they often do not recognize any role in the wave of anti-police protests that swept the country following the murder of George Floyd last summer, and the incitement to “weaken the police” that still grips many cities. Law professor Paul Cassell called this connection the “Minneapolis Effect”, which is similar to the “Ferguson Effect” that linked protests against the police in 2014 with a surge in murders. This time around, protests and policy responses were magnified a hundredfold as activists urged and local politicians considered “discovering” the police force as a whole.

Admitting the existence of a “Minneapolis Effect” is not surprising to supporters of the protests, including many in the media. But without it, the violence of the past year is difficult to explain. If nothing else, it’s common sense: When thousands of people told the police they weren’t wanted, both officers and criminals listened, and violence ensued.

What else could explain it?

When looking for alternative explanations for the surge, many land on the pandemic and the resulting lockdowns and recession. It makes sense that COVID policies, especially closings, have played some role. We know school and work help control crime: when you’re in class or at work, you’re not being offensive on the street.

But there are limits to this explanation. As Zaid Jilani argues, every country has been hit by COVID and many forced lockdowns, but few have seen spikes in violence like America’s. Data from 23 international cities shows that crime has declined during the lockdown – this should come as no surprise as people stayed at home – with no change in murder rates in particular. Why did the US buck the trend?

The recession is an even worse answer than the COVID lockdowns. In the last century, economic downturns have not been correlated with homicide rates. For example, violent crime did not increase during the Great Recession. Property crimes such as burglary and robbery may increase in recessions, but not in the past year. This is likely because the US had one of the most aggressive relief efforts in the world, which is another reason to question mass unemployment as the cause of the violence.

What about guns? There were record arms sales last year, and some blame the increase for the violence. But similar sales figures, for example after Barack Obama’s re-election, did not lead to an increase in homicides. More importantly, the ATF estimates that legally purchased guns take an average of eight years to get into criminal hands; less than 14% of weapons used in a crime were first sold within one year of the crime. Carrying more weapons may have played a role, but that leaves the question of why people carry more.

Another explanation fails: Defunding police stations. Although individual policy decisions, such as New York’s decision to close its crime-fighting street unit, likely contributed to the problem, the defunding has not been systematic, so no systematic explanation is possible. Many jurisdictions have even increased police budgets, while some cuts in other parts of the country have not yet been fully implemented.

Many of the popular explanations for the violent crime wave are partial at best, unrealistic at worst. What role then played protests, riots and the movement to drastically reduce police work?

Nationwide crime data will not be available for months, but data from major cities shows that the surge in murders and shootings often followed after Floyd’s death in late May and subsequent protests in early June. Data collected by the non-partisan Criminal Justice Council for 34 major cities shows that major assaults and firearms attacks in the first few months of the year, including during the lockdown, followed last year’s trends. Homicides were slightly increased, although not conspicuously in line with previous trends. Then, in late May, interest rates skyrocketed. The same trend can be seen in the data from the shot detection service ShotSpotter: a slight increase after the start of the lockdown, then a large and sustained increase after the start of the protests.

Not all jurisdictions follow the same pattern – most saw murder and shooting tips, but protests weren’t always preceded. For example, in Jacksonville, Florida, often referred to as a Republican-run metropolis where the number of murders increased, murders increased during the lockdowns. But that only suggests that the Minneapolis Effect is only part of the story, not that it can be categorically rejected.

One city where the effect seems almost obvious is Minneapolis, of course. The Minnesota lockdown in mid-March had little impact on shootings and serious assaults, which were in line with trends from the previous year. (The number of homicides has increased since the beginning of the year.) After Floyd’s death, however, they all differed significantly from previous years. For example, police checkpoints collapsed, which is a sign that officers are withdrawing from routine enforcement. 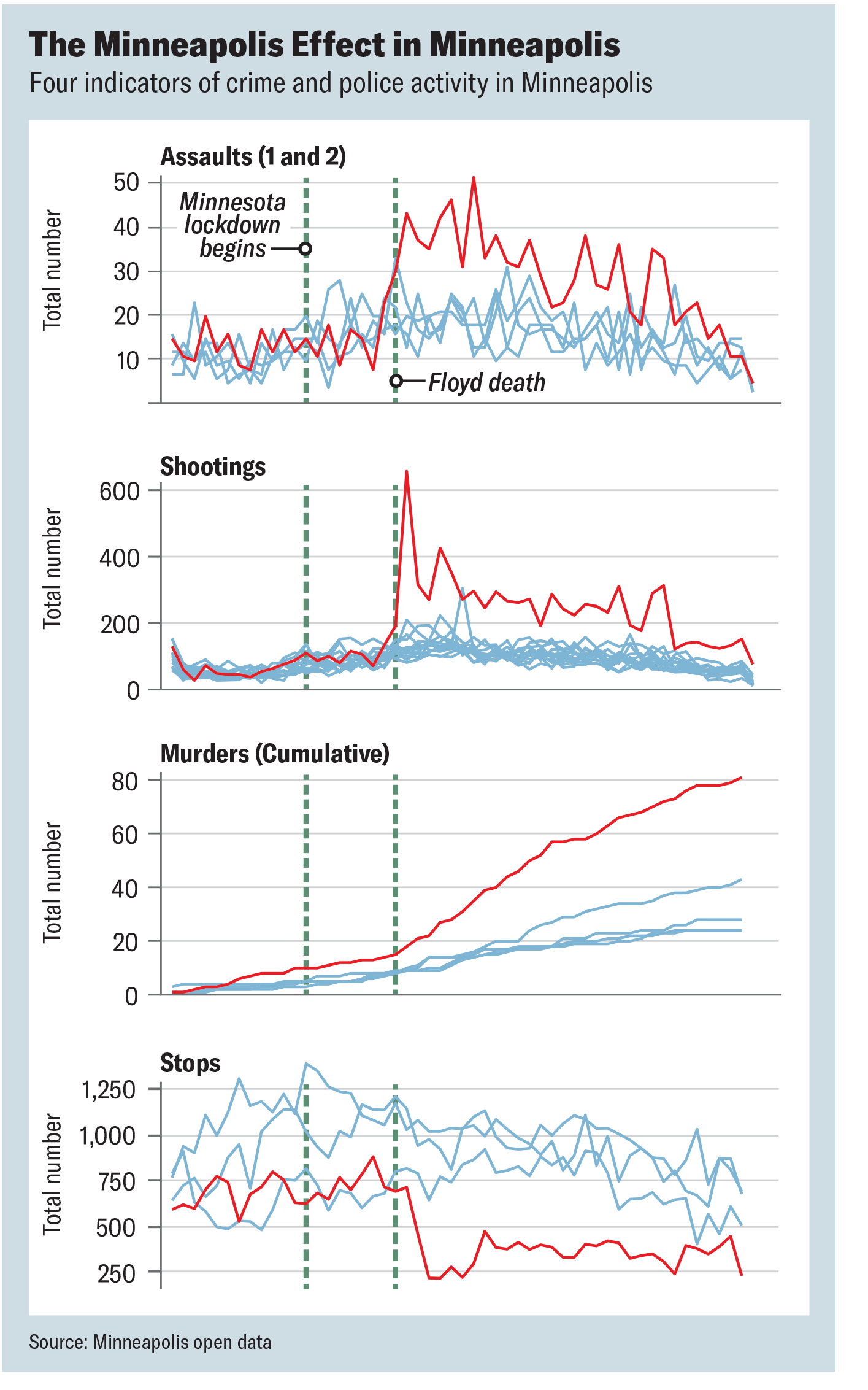 In 2014, the death of Ferguson, Missouri-based Michael Brown sparked protests, rioting, and the nationwide uproar over policing that marked the start of 2020. The next year, murders rose 11% nationwide, then an additional 10% the following year. A debate arose over the “Ferguson Effect”, the idea that the hate speech against the police had increased crime.

In the years after that, research has provided at least some support for a Ferguson effect. Cities that expressed greater concern about police violence also saw greater increases in violence; Cities where “viral” police shootings led to federal investigations have reliably seen waves of murders. One study identified the effect primarily in poor, black cities with historically high levels of violence, exactly where you would expect it. An analysis of the effects of Freddie Gray’s death in Baltimore found that it preceded a sharp rise in crime and a decline in police activity. Polls found that after Ferguson officials feared for their safety, were uncomfortable with blacks, and decreased community engagement; Management level officers also had lower morale and were less proactive, and college students were less willing to become officers.

The exact mechanism of the Ferguson effect is discussed. My colleague at the Manhattan Institute, Heather Mac Donald, has argued that increased scrutiny leads to less proactive policing. Richard Rosenfeld, the criminologist who took up the theory after initial skepticism, connects it with legitimacy: Police violence, especially when it goes “viral”, reduces public trust and thus the ability to fight crime. It is also possible that public hostility may alter the cost-benefit ratio of the job, causing officials to slacken or resign, or that potential offenders may expect to withdraw and increase activity on their own initiative.

All of these causes could have been at play last year. Public trust in the police hit a record low after Floyd’s death, suggesting a decline in public trust and “legitimacy”. A recent survey by the Police Executive Research Forum found that in nearly 200 departments, layoffs rose 18% and retirements rose 45%, while new hires fell 5%. Both bosses and line officers cite public hostility as the main reason.

Data on attacks and arrests indicate decreased police activity. Nine cities saw notable declines compared to pre-2020 around the time home stay orders were being filled. But prices then slowly recovered – until…