In the early hours of last Saturday, the body of a 27-year-old woman (note: she was incorrectly identified as 33 in early reports) was found at EY’s Sydney office and since then, questions have been raised about the events of the final hours of her life. Most reports say she went out for drinks with colleagues and returned to the office around 7 p.m. to finish some work. There aren’t many details beyond that and her identity has yet to be revealed, not even to EY staff. In fact, employees at the firm say EY isn’t doing much at all in the way of addressing it.

Since Saturday morning, staff at EY have complained of being left in the lurch.

News.com.au understands that since Saturday morning’s tragedy, staff have only received one email which stated that a team member had died at the Sydney building over the weekend.

During a pre-scheduled firmwide meeting on Wednesday, employees say the woman’s death was not addressed.

“They brushed over the incident at the start of the call and then went on to talk about the EY demerger for the remaining 50 minutes,” one employee told the anonymous social media page, Aussie Corporate.

Another current staffer said: “There’s a black cloud looming over us at EY and it has been so odd because people are skirting around the event. They’re either saying ‘it’s so sad’, or just aren’t addressing it at all.” 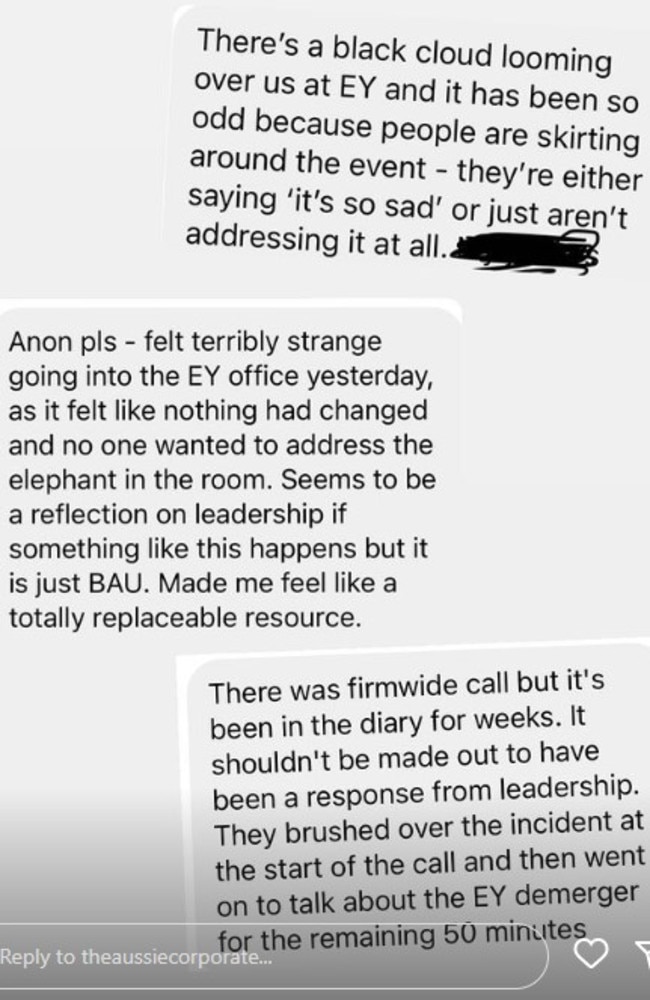 News.com.au understands that even financial auditors at the Sydney office are unaware of the identity of the woman.

On Reddit, one Sydney employee said they were shocked no flowers had been left at the building.

“I do care deeply that I walked into the office this week and not even a single bunch of flowers acknowledged the deeply tragic events of the weekend,” wrote one Reddit user.

Police are continuing to investigate, foul play is not suspected.

If you or someone you care about is struggling with mental health, the National Institute of Mental Health (NIMH) maintains a list of resources you may find helpful. If you are in immediate crisis, dial 988 for 24/7, free and confidential support (United States). Please reach out if you need someone to talk to.

Is your firm paying attention to the two most important words in the English language?

Salary Up to 100000, Check Post, How to Apply and Other Details Here